IsoTech® valves’ exceptional durability is in large part due to the use of our HVOF RiTech® hard coatings with a RC 70 seat hardness, and are designed for up to ASME/ANSI Class 4500 at 1800°F (982°C). 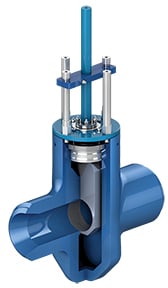 Background: A UK plant situated near the town of Selby, England, is the largest, cleanest and most efficient coal burning power station in the United Kingdom. Its generating capacity is 3,960 megawatts and at current output levels generates enough electricity to meet the needs of seven percent of the United Kingdom. This plant, greatly concerned about the environment, focuses on a low-carbon economy, a concept that refers to an economy which has a minimal output of greenhouse gas emissions into the biosphere, but specifically refers to the greenhouse gas, carbon dioxide (CO2). Understanding their very important role in the transition towards a low-carbon economy, this plant is committed to reducing emissions and have various projects ongoing which will deliver significant savings.

Requirement: ValvTechnologies’ UK distributor, International Procurement Limited (IPL), specialized in the supply of critical and severe service valve isolation solutions. In 2004, IPL began supplying ValvTechnologies V1-1 metal seated severe service ball valves for problem areas such as drains and bypasses for the power station. Because of the longevity and reliability of the isolation provided on the drains and by-passes, the plant began to use the ValvTechnologies products in other applications in the power station.

During 2007 and 2008, IPL supplied a number of 12, 14, 18 and 20” diameter, PSG valves for units one-three on the feed system (start and standby feed pumps, HP heater feed inlet and outlets). These are powerful pumps that can move water at the rate of 150 gallons (568 liters) every second.

Solution: The valves proved successful in providing single isolation, which allowed maintenance to be carried out on tube leaks without shutting down the entire system. IPL has since supplied 8” and 10” diameter PSG valves to Drax Power taking the total number of units to 36. The ValvTechnologies’ zero-leakage valve range is the premier solution where isolation is required for critical and severe service applications, providing increased safety and reliability, while reducing emissions, contributing to a cleaner environment.

Background: While problems with turbines are rare, routine maintenance and repair is necessary and required. It is essential that the turbine be turned with dry steam. If water gets into the steam (moisture carry-over) rapid impingement and erosion of the blades occurs. This can lead to imbalance and catastrophic failure. Any imbalance of a rotor can cause vibration requiring the turbine to be isolated and shut down immediately. In the event a turbine requires maintenance or immediate repair, it is essential to have high-quality, reliable valves for the turbine to be isolated. Failure to completely isolate a turbine can result in a complete or partial plant shutdown, causing safety concerns and increased maintenance costs.

Requirement: A chemical plant in the southern United States was experiencing moisture carry-over into their turbine. The turbine isolation valves were 20“ wedge gate valves with a six inch bleed valve. This particular chemical plant has its own power and steam system. It has several boilers that discharge into a steam header and then the steam header furnishes steam for the plant to use and also delivers steam to the turbines. This system design allows a turbine to be isolated and removed from service for maintenance while not effecting operation of the plant. The turbines were designed with a double block-and-bleed valve assembly to ensure that the turbines could be isolated. When closed, the wedge gate valves leaked so severely that steam passed through the valves and into the turbine. The leak made it impossible to perform turbine maintenance repair and the plant would have to be completely shut down so that the turbines could be accessed. With each occurrence, the cost associated with shutting down the plant was several million dollars per shut down.

Solution: To solve this problem, ValvTechnologies furnished two, 20” PSG valves with a 6” bleed valve and the associated bypass valves. These valves were welded together in an assembly that measured 20’ in length from end-to-end. The client requested this assembly so the installation could be expedited and the total plant shut down time was kept to a minimum. The two PSG and the associated assembly were installed in March of 2004 and the valves have operated numerous times since installation and continue to isolate. The PSG addresses the need for true in-line reparability in large diameter, high-energy piping systems. Specifically designed for steam and feedwater applications, the PSG provides bidirectional, zero-leakage operation for reduced downtime and maintenance costs as well as increased reliability and efficiency.

Background: The plant had two main steam isolation parallel slide gate valves (PSG’s) installed in this application. Design pressure and temperature for the application is 2350 psig at 1050°F (162 bar at 566°C). They were experiencing severe leakage when valves were required to isolate. From initial plant start-up, the frequency of valve maintenance of up to twice per year per valve. The cost of $40,000 per repair, was a particular concern for the plant. These repairs were strictly limited to disassembly, cleaning and visual inspection, grinding the seats and discs and reassembly. Well before the plant anticipated they were faced with having to replace valve seat rings and discs. The plant management decided to look at their alternatives for an upcoming outage.

Requirement: The plant installed two 12” 2500# C12A ValvTechnologies’ IsoTech® parallel slide gate valves during their spring 2014 outage. The IsoTech® valve was the perfect remedy, as it utilizes a RiTech® chrome carbide hardcoating on the disc and seats, providing a more robust, stable sealing surface at elevated temperatures.The IsoTech® valve is a through-conduit, position-seated design, which protects the valve seats from the flow stream, resulting in a valve that provides zero-leakage and requires zero-maintenance. ValvTechnologies is so confident in its ability to withstand demands of steam isolation, that they back the valve with a four-year performance warranty.

Solution: The valves have been installed and in-service for over two years and have experienced over 270 cycles with zero maintenance required. The valve’s ability to provide zero-leakage has resulted in drastically reduced downtime, which combined with the maintenance cost savings, has presented a two-year return on investment (ROI) on the original purchase/installation cost. 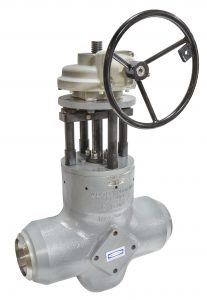 BACKGROUND: Delamination is the separation of the Alloy 6 or 21 hardfacing from the substrate and is believed to be caused by a sigma phase formation typically found when applied to F91 or C12A materials. This results in catastrophic destruction of the seat seal allowing the migration/liberation of the hardfacing, jeopardizing downstream components. The industry first learned of Alloy 6 delamination in a large valve designed for high-pressure/high-temperature steam service at the 2009 7F Users Group conference. 7F Users Group, Inc. is organized to provide an open forum through conferences and technological aids to the owners/operators of the GE 7F combustion turbine generator systems for effective communication, discussion and information dissemination regarding the operation, maintenance, inspection, troubleshooting and repair of such systems to maximize equipment performance and reliability

An alert concerning Alloy 6 liberation came from GE Energy, which issued Technical Information Letter 1626 on January 30, 2009. It advised steam-turbine owners to check the condition of the Alloy 6 inlay sections used in fabricating seats for the OEM’s combined stop and control valves. Guidelines and Specifications for High-Reliability Fossil Power Plants, 2nd Edition “Best Practice Guideline for Manufacturing and Construction of Grade 91 Steel Components”, was introduced in June 2015 by The Electric Power Research Institute (EPRI).

REMEDY:In the unlikely event the RiTech® 31 hardcoating delaminates from the substrate as described above, ValvTechnologies will provide the necessary labor, supervision and tooling to replace the defective components limited to the discs (2) and seat rings (2), either in situ or in a controlled shop environment. This guarantee is in addition to our standard Four Year, Zero-Leakage warranty. ValvTechnologies makes no warranty of any kind whatsoever, expressed or implied, other than as specifically stated herein. 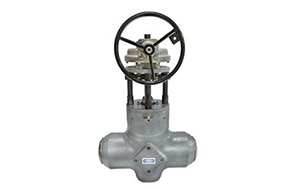