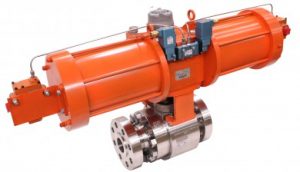 Gasification is a thermal/chemical process that converts any carbon-containing material into a synthesis gas composed primarily of carbon monoxide and hydrogen. During this process, a lower-value carbonaceous/hydrocarbon feedstock (coal, petroleum coke, biomass, etc.) is subjected to high temperatures, moderate pressures and reducing conditions, for conversion to a higher value synthesis gas (syngas) by means of partial oxidation with air, oxygen, and/or steam.

The hydrogen-to-carbon ratio of coal is lower than that of liquid or gaseous fuels. Therefore conversion of coal into an alternative fuel must involve either an addition of hydrogen or a rejection of carbon.

Gasification converts low value residuals into higher value synthetic products. Petroleum feed is mixed at high temperatures (above 350°C/662°F) with oxygen and steam in a gasifier vessel. A hydrogen and carbon monoxide gas mixture called synthesis gas (syngas) fuel is produced and drawn from the gasifier.

The syngas is further scrubbed and cleaned. An inter ash/slag by-product is also produced at the bottom of the gasifier.