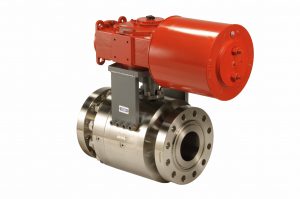 Molecular sieves are often utilized in the petroleum industry, especially for the purification of gas streams. Valves leading into and out of molecular sieves cycle frequently: leakage in these critical areas can make it difficult or impossible to meet product purification requirements. Sour gas dehydration is of particular interest because of the complexity introduced by the acidic and corrosive nature of H2S and CO2. The challenge for dehydration units to maintain their reliability when a valve fails to isolate and/or operate due to the abrasive wear is costly. A single, carefully selected valve can answer a large number of concerns.

A typical dehydration system consists of two or more columns packed with a molecular sieve material. As the wet/sour steam is processed in one column, the other column is regenerating. The switching valves on the molecular sieving system play an important role of direction the inlet/outlet steam of gas into the columns from an adsorption phase into a regeneration and cooling phase in sequence. Cycling frequency varies depending on the molecular sieving system but typically these valves can cycle three or more times a day. The typical lifespan of competitive valve designs in this corrosive environment is approximately one year and routinely replaced during scheduled maintenance shutdowns.

Thermal cycling is an extremely difficult scenario for most isolating valves. Rapid changes in temperatures can significantly impact the valve’s materials of construction. Bodies, balls, seats and stems may all have different coefficient of thermal expansion (CTE) rates, but not necessarily expand/contract at the same rates, which prevents the valve from operating due to ‘seizing’.

Seizing can happen where the sealing surface and/or the sealing mechanism expands faster than the body. This is a particular hazard for single-seated and standard trunnion valve constructions due to the seat grabbing the ball or expanding into the seat pocket. This can create a ’leak’ where the ball and seats separate, causing the gas to pass between the ball and seats sealing surface.

Any valve technology where the sealing components separate and allow particulates to get between the sealing surfaces can potentially create a leak path. This could lead to a valve failure and possibly cause an unplanned shutdown.